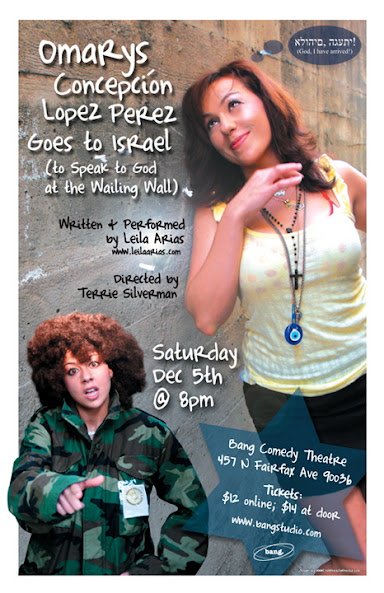 (TO SPEAK TO GOD AT THE WAILING WALL)

created and performed by Leila Arias

Omarys is a Persian/Puerto Rican Catholic girl from the Bronx who desperately needs to speak with God. When her father grants her the birthday present of her dreams, a pilgrimage to Israel, she never imagines that her spiritual journey will start with a lie. Forced to pretend a handicap so they can fly first class proves only the beginning, as Omarys wades through a cast of characters who both help and hinder her progress towards a conversation with God at the Wailing Wall.

Although actress Leila Arias has been traveling the world since the age of 5, it was her trip to Israel that would transform her life. Inspired by Jerusalem and the people she met there, Leila wanted to create a one-woman play to capture and share her experience with others. The result is a passionate and heartfelt comedy show that offers a unique global perspective wrapped into a neat 40 minute bow. “Omarys Concepcion Lopez Perez Goes to Israel (to Speak to God at the Wailing Wall)” marks Leila’s second appearance at FringeNYC.

Leila has appeared in numerous film and television projects including the leads in the comedic web series “Roommates” and the comedy pilot “Wize Guys.” Prior to this, she was the lead and co-writer on “Llegamos,” a live weekly sketch show taped in New York for Latin Television Network “LTV” (US Nat’l/Int’l Cable Satellite). In addition, she was selected a leading cast member / writer for the prestigious CBS Comedy Showcase in Los Angeles. Leila has also appeared on numerous Off-Broadway stages including The Public Theater in New York. The multi-cultural, multi-lingual (6 languages) actor / writer / comedienne earned her B.F.A. in Acting from NYU Tisch School of the Arts, where she won awards for “Outstanding Performance” and had the opportunity to study and perform at the Royal Academy of Dramatic Arts in London.

“It takes a certain kind of performer to pull off a solo-show, and Ms. Arias has the spunk, chops and enthusiasm to transport us to Jerusalem, the Bronx and Puerto Rico in a 40 minute journey.”

“There’s something oddly compelling but difficult to pinpoint about a performer who comes across as subtle while portraying larger than life characters.”